Well, I’ve finally done it. I’ve compiled a list of THE go-to albums that I will just stick on in the background or playing drums to – – without hesitation.

Think most of these albums will feature excellent drumming, to be honest. Probably why they’re my favourites …

Love love this band – been a fan of theirs since their debut, Priorities. And I’m so happy how fast they’re growing as a band – their third album, released last year, blew up the band’s fame and are now doing consistent tours over the world. Their whole back catalogue is brilliant – Automatic in particular. Fast alt rock is always a positive in my book, with corrosively catchy choruses, aching guitar licks and dominant vocals from lead vocalist and drummer alike, it’s too good to miss out. 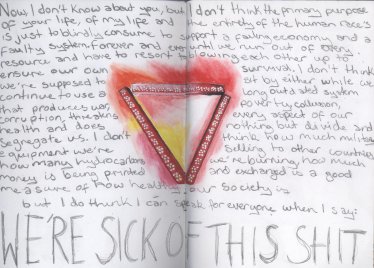 Again, another one of my favourite bands; their music is just as electrifying and chaotic as their live performances. One of the best bands I’ve seen live; with music to match. I’ve chosen their third album as a fave, but to be honest; every one of their albums has its own identity and colour to it. their most recent, The Spark, is much more tentative in comparison; but that’s great. Love any path which this band goes down. The greatest thing about it, is that you can’t really fit them under one genre – they’re a mix bag of talents. A Flash Flood of Colour has great concepts of Gandhi Mate, Gandhi – which is an utter banger. On the flipside of that, it finishes off with beautiful Constellations, a deep reminder of our very existence. Explosive lyrics, powerful electronic waves, dark guitar undertones and exquisitely skilful drumming.

If it’s anything chill, I’d go for pop/jazz maestro Jamie Cullum’s Catching Tales, not only is it a beauty of an album, but it is a nostalgic album for me, comprising both a mix of “poppy” lyrics and eloquent jazz with Cullum’s sweet piano solos.  A must listen.

Blink 182 – Take off Your Pants and Jacket

This is the inner angsty teen in me coming out still. I have a hidden lurve for pop punk, but more specifically, Blink. And this album sums up it for me. Fast punky chords, Travis Barker’s racy drums (which are so fun to play along to!) – what’s not to like? Every song is a blast to listen and sing along to; sums up my teenage years, that’s for sure!

I got into these through their popular album Blurryface, and as I went back on their catalogue, it seemed that their older music is much better, more wiser, and deeper stories and conversations within their lyrics aswell as the melodies themselves. Good one indeedy…

Larnell Lewis – In The Moment

Going further down the chill route, I would have to punt for Snarky Puppy’s In The Moment. I’ve recently become a big fan of their fusion music over the past month, their whole truly professional group producing awe-inspiring music, allowing each and every one of them to breathe and to extenuate their skills on their instrument. They’ve mastered the fact that it doesn’t have to necessarily be all noise for it to sound good.

And what comes from that, is their drummer Larnell Lewis’s album efforts In The Moment, a truly extraordinary album that came out earlier this year actually. Taking inspiration from Snarky Puppy, compelling solos are splashed everywhere, not just for Lewis himself but the whole band. This album gives Lewis high praise as a composer as well as a drummer. Even though its his face and his name on the album, he knows when to be the drummer and just keep such a solid rhythm, and not to be brash and bold in your face all the time. Change Your Mind is a grand example of that. And damn are they sweet solos … give it a listen!

So there ya are … Just some of my faves; so take some time out to put on your headphones and dive into music heaven…

That’s all from me, for now.