After a month’s hiatus, we’re back for Hidden Gems and its thirteenth instalment. Looking for new artists to sink your teeth into? Wishing to show your support to those undiscovered but worthy artists? Well, look no further.

Previous Hidden Gems – y’know .. in case, you missed it: 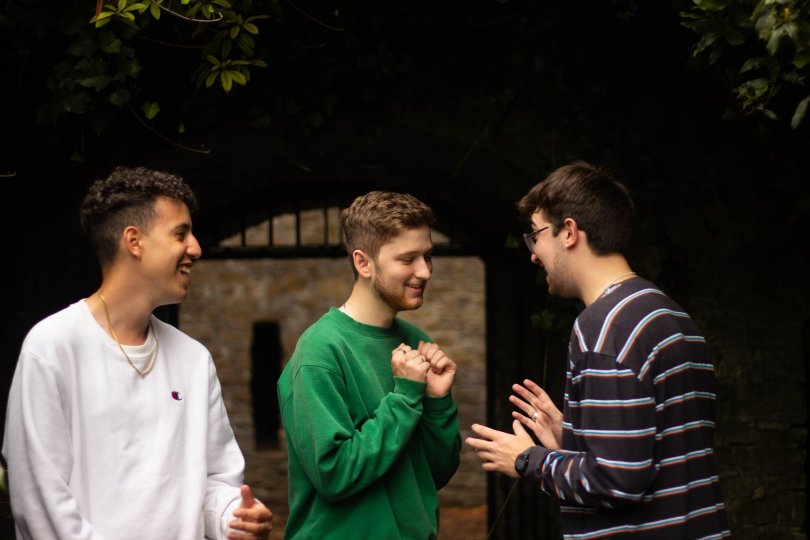 See our favourite picks from the Hidden Gems series via the selected playlist below:

Simply put, Audiokicks are out to make you feel good.

Almost like one of those perfect buoyant music backdrops to an ending of an instant film classic, their indigo-indie work is completely unblemished.

Drawing inspiration from indie-alternatives, Keane, Radiohead and Stereophonics, their prolific song-writing, emphatic vocals and their perfect band balance is ever-present in the likes of, One More Shot, All I Ever Want and of course, their most recent single release, Grow.

As we remain in an uncertain world right now, Grow carries themes of exactly that. Attempting to grow – in a time where we seem to not be growing at all. Lush in its complexion, it is a fitting soundtrack. Let’s hope we’ll see each other on the other side once this is all over, eh?

Listen to Where’s My Title? HERE.

Unrivalled with the wit, charm and the drawl of 90s Britpop, Spooky Goose are bringing a sense of the same with their distorted style of Blur and Supergrass –

and it comes with a whole new fresh outlook on it all.

Having released their second EP, Where’s My Title? earlier this month, they are looking to pick up where they left off from their debut, Whelking Accident – with a much darker, twisted version of events.

Colossal quips of Am I Gonna Die? and Lover Boy are stoic feats that smash through the normal and enter terrority that the likes of even Damon Albarn would be impressed to call his own. The trio originally harking from Kent are setting the standards on what originality looks like – and an unfamiliar force comes with it.

then you shouldn’t have to worry with these lot.

Setting their place firmly in the ether of rock and indie music, Daydream Runaways are an act to be reckoned with. Smashing it live as you would normally expect, they are set to light the spark creating more anthemic indie-tales of dreaming nostalgia, tempting arousal and satisfying uplifts of nothing but … happy music.

Simply put, it’s a joy to listen to. If they are set to have a year like they expect, they will soon cut through the noise and end high up on the lists of booking agents across the UK. Releasing their three-parter EP Dreamlands back in 2020, it features tasty works of Fairytale Scene and Light the Spark that alone, have seen countless radio plays, worthy attention and a result in us as music fans, hungry for more.

Music that makes you wish you were somewhere else is hard to come by.

Sultry single, Amsterdam does exactly that.

Glorious in shade and beautiful in quality, the three Worthing lads are setting you on a course to your own daydream. Proposing an entirely DIY ethic to their music construction, they have not been the opposite of quiet throughout lockdown spending countless hours writing up countless songs that all manage to do a something a little extra than the last.

They have since chalked up an EP in the form of Paint the Sun last year (featuring favourites, Invincible and If I Leave) and now are looking to tempt us with more music on the horizon with two-parter Amsterdam (featuring self-titled and September). Recent release, Amsterdam really wishes you were somewhere else. Enjoying summer without a lockdown in its way, is hard to come by.

But with Amsterdam, comes the well-deserved future we are all looking hoping for. We’ll be on those festival fields in no time. Keep looking forward.

That’s all for this week, folks. Keep your eye out for more artists you need to sink your teeth into …

Amidst a worldwide pandemic, indie-alternative favourites Nothing But Thieves screech out what we’ve been asking ourselves throughout this turmoil of tyranny with … MORAL PANIC. Mixing the collusive works of elusive alternative rock with the freeing styles of pop, Nothing But Thieves have risen to crucial acclaim from such singles like Amsterdam and Sorry which […]

Reclaiming the title of incorporating elements of all kinds of eclectic genres, grandson returns in spectacular fashion with a collaborative side-hustle with Until I Come Home. This comes after his debut album of Death Of An Optimist in 2020. The darkened urgency of Dirty and Identity took the Canadian/American alternative artist, Jordan Benjamin, to new […]

Hey folks. Whether you were immersed in the magnificence of Netflix’s special production of Tick, Tick … Boom! or merely enjoyed the presence of Adele’s sultry voice again in your ears, I do hope you had a pleasant – and somewhat relaxing – weekend. This Sunday, I thought I would jump on here for a […]

In one of the most controversial, ever-changing and unpredictable industries, join my rants and ravings as I dissect the music industry word by word through technology, current events, industry stories and problems.

Some nice acts here. I’m really like the music of Daydream Runaways and Moonlight Parade. Thanks for giving me some new music to listen to!

Ah fantastic news! No problemo, thanks for stopping by, my friend.